The (trans)national as contested space

The role of the nation state and its connection to supranational organizations is one of the most hotly debated issues in politics today. As Brexit and the current American elections show, the sovereignty of the nation state may be making a comeback. Yet political developments can also be read as reactions to an unstoppable globalizing process that has accelerated since the twentieth century, and which has had an impact on the canon, on our student population, and our curriculum. In the wake of the transnational turn that has questioned mononational narratives of literature, we study literature in the understanding that issues of nationality, transnationalism, regionalism, race, and ethnicity are contested spaces that invite constant redrawing. Literature can be read as reflecting as well as shaping this dynamic interplay historically and as a space where these tensions can be tested and discussed today.

When astronauts on the Apollo 17 took this photo of the Earth as a small blue planet surrounded by infinite space, they sparked a sense of belonging that grew into the environmental movement. Like photos, literary texts shape our perceptions of the spaces we live in, expressing and affecting our connections to our environment. This spatial perspective is fully integrated into your ecocritical readings of literatures role in shaping and contesting ideas of wilderness, interconnectedness, and belonging. In our ecocriticism courses, you explore literary as well as visual representations of the relations between humans and their environment from the early modern period until now. You learn to think about the role scale and perceptions of space play in environmental awareness, and the ways literature can foster a sense of connection with places.

Like the nation and ecology, the body -- whether human or animal  is a contested space. While dominated in Western cultures by the Cartesian distinction between body and mind for centuries, various discussions about the classification, demarcation, function, and nature of the body have taken root since the last century. These have intensified in this century as a result of new scientific discoveries, new and anticipated future technological developments, and the influence of non-Western cultures. We are principally concerned with the literary and visual representation of the body as being gendered, enslaved, traumatized, and having agency or not, and the relationship with hegemonic discourses in society, from early modern times to now. We are, in other words, interested in the notion of life as an embodied experience, and how literary forms provide a space to foreground that issue. We welcome students who are eager to work in that area.

The programme in a nutshell

In this Research Master specialization, you examine the roles literary texts play in the representation and shaping of contested spaces. Novels, poems, and plays shape our perceptions and affect our lived experience of such spaces as the nation, wilderness, or the body. These spaces are contested in our current context, and have been in the past centuries. In our seminars, tutorials and individual research projects, you explore how literary texts have played a role in shaping our experience of such contested spaces. In this specialization, you pursue your fascination with the ways in which literary representations interact with real or imagined spaces, geographies and ecosystems. You focus on literature and three kinds of contested space: the (trans)national, the environment, and the body. We welcome students who are keen to hone their critical thinking and research skills in this field; we offer you the chance to pursue your research interests under the guidance of specialists in the field.

The study programme of 120 ECTS (60 ECTS per year) consists of mandatory and elective parts (check out our website for more information).

The Research Master specialization Literature & Contested Spaces prepares you for a career as a researcher. We will train you in the skills required to pursue a PhD within academia, and guide you in the writing of a research proposal for a PhD project. You may also become a researcher in a cultural institution, government agency, or NGO. 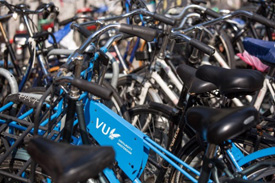 Vrije Universiteit Amsterdam is an internationally renowned research university founded in 1880.
The university is located in the vibrant city of Amsterdam, one of the most multicultural cities in the world, with the largest concentration of students in the Netherlands and where English is the second language spoken. The campus is surrounded by one of the most dynamic and fast-growing business districts in the Netherlands hosting over 700 companies.

With more than 23,000 students, of which 3000 are international, the university conducts cutting-edge research into problems of major societal and scientific importance. Vrije Universiteit Amsterdam distinguishes itself in research and education through four interdisciplinary themes reflecting a strong level of involvement in current societal issues: Human Health and Life Sciences, Science for Sustainability, Connected World and Governance for Society. As a student this will help you to look beyond the boundaries of scientific disciplines, to engage with society and to seek for tangible solutions for a better world. In addition Vrije Universiteit Amsterdam regards diversity, whether in culture, conviction, nationality or prior education, as source of innovation and progress, and hence as special strength.